I address you by your first name, as that is the custom in my country, Iceland, the global leader when it comes to closing the gender gap. We are a small country, but we are at the forefront of economic and social progress. I consider myself lucky to have been born and raised in a country generally considered to be the best place in the world to be a woman and believe there are lessons to be learned from our experience.

On October 24th in1975, Icelandic women went on strike. They did no work that day and nothing got done. Whether they held professional jobs or worked at home, nothing got done. These bold Icelandic women, who are not that different from any other women, marched into the centre of Reykjavik and peacefully and in solidarity demanded equality. Nothing worked in Iceland that day, because nothing works when women are not at work. A strike was needed to show how women matter – and it was beyond my understanding at the age of seven, but the way women found power that day and found their voices that day was forever impressed upon me. Women matter and if their value is not recognised, they will organise. 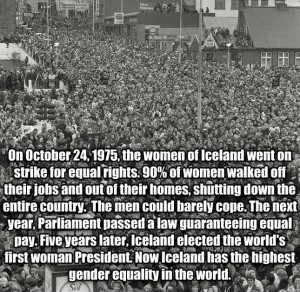 This movement, known as “the women strike” paved the way for social progress. Icelanders democratically elected the first female president in the world in 1980. Her presidency inspired boys and girls all over the world and I can honestly say that I might not have run for president if I had not grown up with her as a role model. Icelandic women also founded an all-female political party in the 1980s and changed the face of politics forever. We now have almost equal number of women and men serving in our parliament. We have appointed a female Prime Minister (and she is gay), we elected a female bishop and we put a woman in charge of our police force — just to name a few important glass ceilings we have shattered in recent years. Role models matter and serve to motivate and inspire our young people to reach for greatness, making our country that much stronger.

In Iceland, women participate in the labor market in greater numbers than anywhere else, yet we also lead in terms of birthrates. This is possible because we have invested in childcare infrastructure and we offer paid parental leaves. Icelandic mothers and fathers are entitled to three months of paid leave each. This is how you create culture. Additionally, three months of paid leave can then be taken by either parent, resulting in a total of nine months of paid leave. This levels the playing field and provides men and women the opportunity to choose to enjoy both professional work and family life. Iceland experiences greater economic growth because we release the value of both women and men in the labor force and we enjoy a more favourable (younger) demography than most countries because our work participation does not come at the expense of having children. Closing the gender gap is not a women’s issue as progress delivers economic and social progress for all. Involving men matters.

When Iceland experienced its financial collapse in 2008, we faced an even more serious breakdown of trust and values. I was the co-founder and chair of a female-founded investment firm at the time and we survived this infamous meltdown in tact, one of few if not the only asset manager to do so. I credit a talented team and good timing but most importantly a strong set of values. We set out to be risk-aware straight talkers who would provide independent and unbiased advice, do emotional due diligence as well as financial due diligence and achieve profit with principles. Those values served us, and our clients, well. Following the crisis we organised a national assembly where a random sample of Icelanders gathered to discuss the values that should guide us forward. A clear picture emerged as Icelanders from the age of 18 to 80 united around honesty, respect, equality, justice, family and sustainability.

I ran for president to promote these values and I was equally clear on the principles of my own campaign. These values led us from 1 percent in the polls to becoming the runner-up in the election. Values matter and a good leader knows that success is not determined merely by what we do or achieve, but more importantly by how we get there.

Dear Donald, you do not only have the opportunity, but also the responsibility, to set a new and inclusive tone when you move from President-Elect to becoming the US President. With good leadership it is possible to empower and unite everyone to contribute to economic and social progress in America and beyond, the role-model matters. I will leave it at that with encouragement and greetings from Iceland.