Reykjavik, Iceland on the International Day of the Girl

I woke up yesterday thinking that I should write you a letter, to say thanks. I don’t know if it was your intention, but you have truly become a powerful force for positive change in this world.

Because of your words, actions and behaviors, women and men around the world and across political spectrums are now in an unprecedented agreement as to what we don’t want to see from the leader of the free world. Because of you, we are now having real and authentic conversations about the importance of principled and positive leadership. Your actions have brought us together to stand against misogyny and other forms of disrespect in the world.

Mothers, fathers and athletes alike will never take a leader seriously who dismisses sexual assault and calls it “locker room talk”. It is not only offensive but also wrong and it sends a dangerous message to young boys and men.

Women and men alike will never respect a man who lies and lurks behind others when they speak with demeaning body language and constant interruptions. It is not only disrespectful it is everything we try to teach our kids not to do. 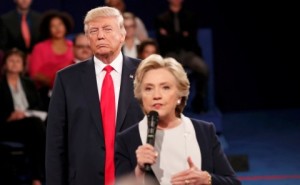 Girls and Boys will never grow up to be contributing citizens if a person running for President brags about his tax avoidance. It is not only proof of poor character it has the potential to break the social contract.

Thank you Donald for challenging us enough to have these important conversations. To create conditions where real leaders step-up and speak out. Because of you, good people have shared real leadership lessons, like the one from Michelle Obama “When they go low, we go high.” And the one from the ordinary man considered by many to be the “winner of the last debate” because he asked the question that forced you to show us that you are capable of human decency and respect.